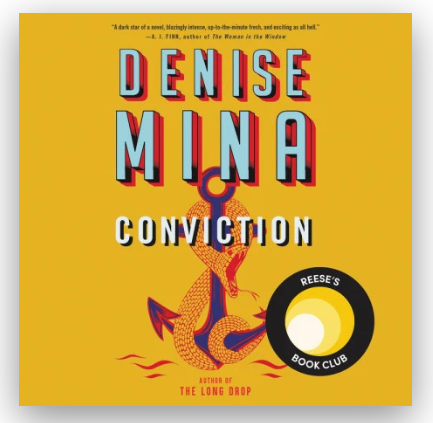 Scottish author Denise Mina opens her thriller with our hero, “Anna,” slinking from the bed she shares with her wealthy, distant husband. The Glasgow housewife’s guilty pleasure? Coffee and a true-crime podcast listen before her little girls wake up.

To her surprise, the subject of the podcast is a man she once knew and liked—and the podcaster tries to pin a murder-suicide on him.

Then her life falls apart, for the fourth time. Her husband was distant because he’s dumping Anna for her younger best friend. Sugar bowls and cutlery fly. There is blood. Hubby, kids, and homewrecker head off for Portugal, leaving Anna in a bleary heap.

She contemplates a rope in the basement. Cursing her father for his suicide, she schemes where best to kill herself so her little girls won’t discover the body. Maybe her secret will die with her.

But she’s foiled by insistent knocking on the door. Wracked by anorexia, Fin is the famous frontman of a defunct rock band. He’s also her faithless best friend’s cuckolded husband. Anna’s mothering instinct kicks in and she agrees to drive him home.

When she shares the podcast with Fin, he points out an obvious anomaly. With nothing better to do, the jilted pair embark on a quest for answers.

Even deeper runs the theme of storytelling itself. The novel’s frame is perfect: Anna opens the loop, admitting from the start that she’ll edit her story judiciously and from her particular point of view. Different characters weave tales tangential to the main plot and discuss the crafting of a proper story. And the ending closes that loop with one splendid sentence.

Question: I couldn’t figure out the title. Is it just a random word, tagged onto this great book because Denise Mina is a known author and it conveys a bit of a crime theme as well as the character’s beliefs? Social justice? What am I missing?

This site uses Akismet to reduce spam. Learn how your comment data is processed.